The London Palladium is an iconic London theatre with an enormous history of celebrity performances. The theatre is must-see for anyone interested in the Royal Variety Performance. 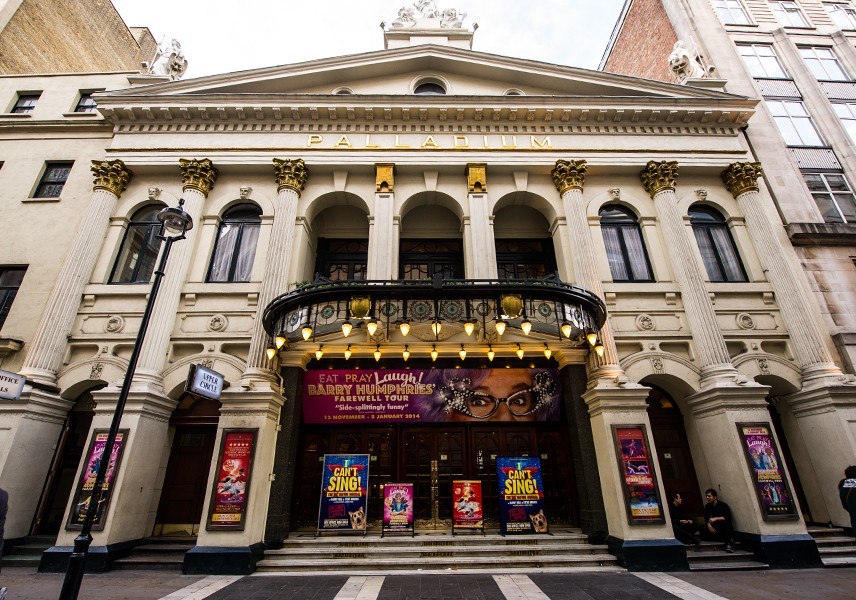 The London Palladium opened on Boxing Day 1910 with the first ‘grand variety bill’ featuring acts as diverse as Nellie Wallace and classical actor Martin Harvey. The Frank Matcham designed building occupies a site which was previously home to a Corinthian Bazaar, Hengler’s Grand Cirque and the National Ice Skating Palace. For many years it played host to the annual Royal Variety Performance, and was the home of London’s most spectacular pantomimes.

The history of performances at The Palladium is by its very nature little more than a list of star names. The great and the good from both stage and screen queued up to top the bill at ‘the world’s most famous theatre’ and audiences flocked to see them. Famous bill toppers in the 1920s included Harry Houdini, Dickie Henderson, Gracie Fields, Billy Bennett, Sophie Tucker, Burns & Allen, Jackie Coogan and Ivor Novello.

The Palladium hosted its first Royal Variety Performance in 1930. The London Palladium celebrated its centenary on Boxing Day 2010. Celebrations included a gala concert presented by the building staff, paying tribute to the musicals and artists that have appeared in the last 100 years, the return of The Royal Variety Performance to its spiritual home, a month of special centenary building tours and small exhibition in the rehearsal room, a plaque unveiled by Bruce Forsyth, Andrew Lloyd Webber and Danielle Hope, celebratory radio broadcasts on BBC Radio 2 and Radio 4 and a one-hour documentary on BBC2.

With the opening of the new production of The Wizard of Oz in 2011, Andrew Lloyd Webber also unveiled his major renovation of the box office facilities and a brand new means of accessing the Dress Circle and Stalls directly from the box office. The works substantially increased the movement space and comfort for patrons on arrival and during the interval and have also allowed the provision of more ladies’ lavatories – a grand gesture to mark the second century of the world’s most famous theatre.

Since December 2005 the London Palladium has been owned 100% by The Really Useful Group Ltd.